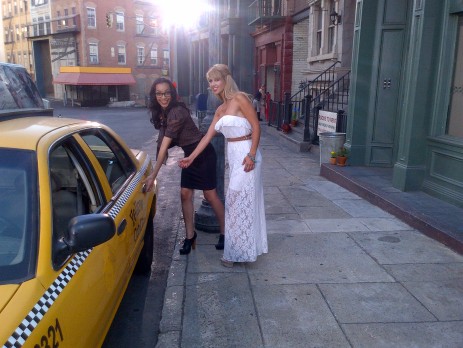 Apparently my specialty seems to be working on music videos and angry, dramatic roles. In Mika Newton’s production of her single “Come Out and Play”, I get to represent both aspects. Mika is a pop artist from Ukraine with a powerful voice that apparently can change your whole day–according to the concept of the video. You’ll see what an influence she is on her environment once the music video comes out on August 31st. I’ve been waiting a while for this one since we filmed it earlier this summer, so I’m glad that it’s finally premiering this month!

In my last post I talked about how Drew Seeley was so down to earth despite his fame, well Mika is the same way. She was constantly interacting with everyone on set and engaging in banter throughout the entire day. I appreciate that, and I hope her grace and humility take her far in her career. Other than a fabulous cast and crew, I’m always down for a good dance party at the end of the day. So, there’s that too.

Here is the behind the scenes footage:

Thank you for stopping by, and I hope to see you here again soon. God Bless you and your journey. Until Next time…